Today I picked up Broken Bells at Best Buy – on vinyl. It started by out from this post on /r/vinyl that pointed to a list of Best Buy stores that carry vinyl. It was not well received and understandably so. Buying vinyl is one of those things that’s probably best done at a mom and pop store if you can find one. Folks that appreciate music perhaps more than the likes of Best Buy. Regardless, I had to see this for myself so I went. Turns out the one by me indeed had a selection of vinyl – about 1/3rd of a aisle. Had an ok selection too, some albums that are on my want list, though I opted to take a chance on Broken Bells. 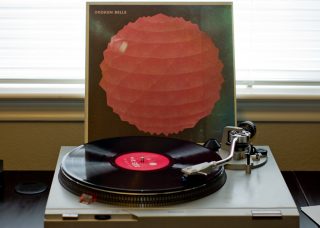 I wasn’t disappointed! The album sounds great and regardless of the format listened on, it’s an album to get in my opinion. It’s got this smooth sort of college rock feel to it. As an aside, I was able to listen to a few of their songs off the album at ACL last year and they put on a pretty good show!

The vinyl itself is the heavier 180 gram stuff. I’ve heard that’s a bit gimmicky but I did notice the record was noticeably less wavy on the table than my other vinyl records. The vinyl doesn’t sound as good as some of my other vinyl records in terms of warmth, but still sounds very good. More interesting than the vinyl though, is that the album came with a code to download the MP3s, thus giving me a near pristine (but not lossless) digital copy. So that was nice and one of the things that tipped the scales in favor of picking this up over, say, the reissue of U2’s Joshua Tree on vinyl.

So yes the album is great, but beyond that – now that I have an easy way to compare the vinyl and digital releases, I figured it was worth giving it a look. There are other reasons to listen to and collect vinyl than just the sound, but let’s focus on that for a bit: 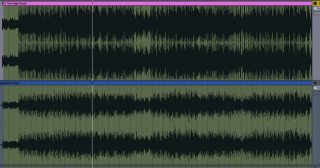 It should be obvious, but the top wave is the MP3, the bottom the vinyl. Immediately noticeable is the “brickwall” on the MP3 versus the vinyl which clearly has more dynamic range. At least when compared to CDs, vinyl supposedly has less dynamic range from what I have read. MP3s should be reasonably similar to CDs in this regard as well. So one could assume that the digital copy was intentionally mastered with a higher level of compression of the dynamic range.

That has its merits. When comparing the two songs myself, the MP3 is certainly louder with the drums being more noticeable, as is the bass to a lesser degree. It’s clear too, obviously. All the instruments can be heard clearly. Overall though, it sounds compressed – it’s just loud and almost obnoxious compared to the vinyl. All the instruments are almost overpowering as a result. The vinyl has subtleties among the instruments by comparison. They play on each other instead of all yelling in my ears at the same time. Between the two, I honestly do prefer the vinyl version.

That really has less to do with the vinyl though. That has to do with the mastering. I get the concept behind brick-walling – throw the MP3 on your portable device of choice, connect it to your car’s stereo and you’re off. Between the vinyl rip and the MP3, the MP3 is surely going to be easier to hear in the car hands down. That’s one radio FM stations often run things through a compressor. It frankly sounds a bit like shit, but you can at least hear everything. I don’t agree with this practice – it should be up to me to decide on how I want to hear the music. I’d rather the mastering engineer give me all the dynamic range he can while making it sound great.

Yet another one of my posts about the loudness war, I know. But I think there is some merit to it all. I have read numerous writings online that CDs should have better dynamic range vinyl yet it’s ironic that the vinyl version of the album is the one that seems to have the dynamic range?

FOLLOW UP: You know, after thinking about it for a bit, I can’t fault the MP3s too much since the vinyl release is meant to be listened at home, where one can appreciate the dynamic range and subtleties in the volume. I haven’t checked, but I would bet that the version of the album on iTunes is brickwalled though too. I guess the point is that modern digital formats should have dynamic range that one can later run through a dynamic range compressor to dump onto your portable device for playing in your car on on the go. Compressors don’t seem to be difficult to implement so that might be a worth feature addition to iTunes and other music management software out there. Boom. Problem? Solved.