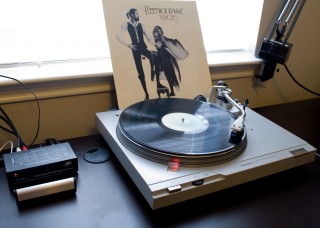 Of all the albums on my list to get on vinyl, at least among the vintage albums, this was at the very top of my list. I would still have been on my list in fact, were it not for a very nice Redditor who sent me both this album as well as Neil Young’s Harvest (which I will review at some point soon too) just because he had some extras. It was an extremely nice gesture and for his kindness, I gave him a few months of Reddit Gold (to at least help cover shipping). I still hope to repay it someday by “Spinning it forward” as it were and give a fellow vinyl enthusiast something of mine.

The Redditor was in Canada so it took quite a while to get all the way down here to Texas given the postal strike up there, but the wait was oh so worth it. I should get more vinyl from Canada since it rained on the day it arrived (and we really need the rain here).

But I digress, so how is the album? Read on!

I used to think, before U2 started being douchey about piracy given their gross piles of money, that The Joshua Tree was an album everyone should have a copy of. Even though U2 has sort of sold out in my book, I still tend to think that. I have to say, though, that Rumours really had me thinking about the statement. It’s a fantastic album and, so far, my favorite of theirs. It certainly has almost all the songs I remember from them. I pretty much love every track and it. In recalling their Behind the Music, this album was a bit tumultuous and, perhaps, in a way that is what made it so good.

My friend Dan says it’s hippie rock but, whatever, it’s some good music and good to have on any format. That said…

How does it sound

It just so happens that the vinyl version sounds amazing to my ears. I have a few songs off the album in digital form and they sound tinny, flat, and lacking in overall detail. For instance, I can hear string buzz occasionally and hear the pick hit each string. Everything just sounds more life-like and harmonious. My wife did mention that the drums sound loud and almost distracting on the vinyl version. I can sort of see what she is getting at. Compared to modern mastering techniques, there is an air of imperfection perhaps on the album. To some degree it’s perhaps a bit raw. I find that a great thing, however, because the sound just seems vivid. The music really sings.

It’s all subjective of course – I wouldn’t doubt there are those that might prefer the digital remaster but I can say, for certain, I prefer my copy of the album on vinyl. Perhaps it’s my setup, the vintage mastering, or magic; but all my classic rock albums just sound fantastic. They generally all sound alike in terms of the overall sound – they just sound natural and rich to me and not over-engineered. I wish modern music was mastered like these albums, but of course they all generally predate the Loudness War so I’m sure that has something to do with it.

For what it’s worth, my album is this version (the original Canadian release).

My copy came with a gate-fold inner sleeve that has a collection of black and white pictures of the band on the inside and a few pics and lyrics on the outside. It’s a nice to have but I’ll likely end up getting a poly-sleeve to put the record itself in as it does not offer up too much protection. The nice Redditor was kind enough to give me a plastic album bag though to keep the dust out, though.

I always thought Lindsay Buckingham was a clean-shaven through most of his career. Nope. All the dudes were rocking full beards during this time and they sort of flaunt the fact that they look like nasty-ass hippies on the album art. With the exception of the front cover, which was done rather artistically. The front is simple, but really draws me in.

All that said, words are boring – what better way to express the album cover than to see it!