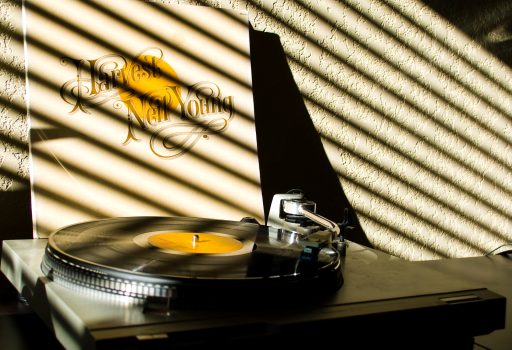 A while ago a fellow reader of /r/vinyl was kind enough to send me Fleetwood Mac’s Rumours on vinyl. Included in that kind gift was a surprise album that turned out to be Neil Young’s Harvest. I have spun Harvest quite a few times but have not been able to put together an interview until now. It was partly due to circumstance and due to me. But, either way, it’s a fantastic album and I promised I would give the fellow Redditor my thoughts and so here we go – my review of Neil Young’s Harvest of vinyl.

Harvest is an interesting album for me since it’s a bit of a rediscovery. Harvest was one of the first albums I ever had on Compact Disc. Back then, I was too young to have a clue of what Neil was actually talking about. The rather simplistic songs on the album disinterested me at that time, when I was much more obsessed with modern synth-pop and the like. That was a bit unfair, but the album just did not speak to me as a young boy.

Flash-forward an unspecified amount of time, I have grown up and have broadened my horizons as a listener. I still enjoy modern music, of course, which is often rather complex compared to Harvest. The difference, however, is that I now have an appreciation for the album at a deeper level than I ever had as a young boy. I was hoping my age and maturity would have helped me understand what it is that Neil was actually talking about. Nope! Well, I suppose that’s not totally true.

The album is both a simplistic album in many ways musically (which isn’t a bad thing at all, mind you) as the story Neil is unraveling on the album. At least for me. Simple songs about a simple man. I equate the album to what it might be like living on my own in a small town with nothing much else to do than sit on the porch, maybe watch a river, and think. Not about anything dramatic, just about what life might be like with a maid. And I think that is part of what Neil might have been going for. I think?

The nice thing about not understanding the album is that it’s fun to listen to over and over. The music itself, though it is a bit simplistic, is wonderful. It’s catchy, soothing with Neil’s vocals capturing me in. I usually don’t pay much attention to lyrics, but though the meaning is one I have a hard time understanding, the lyrics come through and actually make me think a bit.

Long story short, it’s a great album to listen to when I need to slow things down, have a change of peace, and reflect. It’s an album that will probably age with me. I get a feeling I will understand more and more about the album as I get older. I owe the Redditor that gave this to me extra thanks. Were it not a gift, I probably would have never given Harvest a second thought. While the album isn’t something I listen to often, when I do, it speaks in a way I truly appreciate and it’s now among my favorite albums that I have on vinyl.

How does it sound

Back when I had the album on CD, I listened to it on a comparatively crappy pair of headphones usually. I didn’t think as much about quality, thinking the CD itself was doing all that hard work for me. I no longer have the album on CD to compare, but as I recall it sounded flat and uninspiring on CD. And this was on an older CD (before the loudness war). I get the impression that if I listened to it on CD now, it would be far less captivating than the vinyl. Part of my discovery of vinyl has been the appreciation for what analog recordings actually sound like. I think that was largely lost on the CD version. To be fair, since I can’t compare them, perhaps some of this is the romance and allure of vinyl as a medium. Regardless, I much prefer this album on vinyl. CD and digital just spoil part of what makes the album so great.

The album sounds vintage; and by vintage, I don’t mean old. But it has a distinctly analog sound that is perhaps more dusty for lack of a better word, but with interesting depth. It sounds smooth, perhaps slightly low-fi, but pleasing to the ear. One thing I have noticed on vinyl, which is true of this album as well, is that the sound is just more natural. It is not that things fit better necessarily, but that they don’t sound intentionally over-processed and fake. The various instruments on that album also have a surprisingly amount of depth. I don’t want to say clarity, because I tend to associate that with staleness. It’s more like they sound more rounded and even detailed, but in a way that isn’t blatantly in your face.

In other words, the album sounds very analog, but wonderfully so! Among my growing collection of albums on vinyl, new and old, few sound more natural and pleasing than my copy of Harvest. Hence, if an analog vintage sound is what one is after, one need to go no further.

My copy of the album is a gate-fold with an insert that included the lyrics of the songs in hand-written script. Inside the gate-fold is a panoramic of a doorknob with a person in the reflection of the doorknob itself. On the left is the track-list and the usual information.

I ended up receiving this album as a bonus to Rumours and, as it tuns out, in some ways, I actually like this one better. Perhaps for different reasons. I think the only downside of this album is that it makes me feel older. I hate getting older (who doesn’t, I suppose). But with getting older, the album seems to become more and more unique. For being simplistic, there is a lot of depth on the album in terms of me trying to figure out what it is that Niel is rambling on about. It sounds fantastic on vinyl as a result and is now perhaps among my top 5, or even top 3, best records I own.

A huge thanks to the Redditor who bestowed to me such a gift and my apologies it took so long to put this together. I promised to continue to “spin it forward” and, indeed, I will!