Recently I bought some Vision 3 film along with a development kit from Quiet We’re Dreaming, a new lab focusing on Vision 3 for still photography. I have, so far, only shot one roll and have yet to mix the chemicals yet since I don’t want them to go off too soon. I hope to get to that in a few weeks though as I plan on taking more photos with this Vision 3 stock for the Holidays. Anyways this started me down an interesting path because one of the things I noticed is that the development time for ECN-2 is pretty short. I’ve also been looking at buying Kodak C-41 chemicals directly for the separate bleach/fix option (instead of blix) and those, too, have short times. And that got me thinking seriously about a rotary processor like a JOBO.

I started looking at just the JOBO hand rotary, but the thing, at the time of this writing, costs $100! I know JOBO stuff is high priced but usually worth it, but that’s just too far. I couldn’t justify that knowing that I could simply build one. So I did! 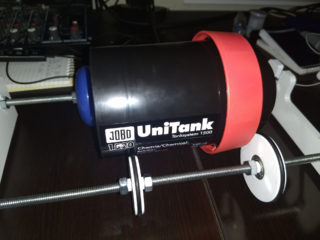 I used parts I already had common to 3D printing projects, such as 608 bearings and those threaded rods. I had to buy some o-rings but the rest was 3D printed. Given parts I already had, it cost me well under $10 if you don’t account for the time it took to design it (which wasn’t that much and something I enjoyed anyway). 1/10th the price of the JOBO for the same thing basically.

But I didn’t stop there. I wrote the code as part of my DevDawg project to handle using a motorized rotary but I never came up with a good solution up until I started working on the hand rotary. It’s basically almost the same thing, except one of the sides is replaced with a motor mount. I built adapters for the motor and bottom of the tank that uses magnets to keep the tank attached to the motor and BAM! Motorized Rotary!

As you can see, it’s still a prototype but I’ve now developed some black and white film with it with great success! I have been pondering the next steps. I would like to try and come up with a modular solution such that the main controller can be used as a development timer, a rotary processor, a water heater/temperature tracker, etc. so it can be used for as much or as little as one needs and can be expanded down the road. My current plan is to have the main controller that will house the LCD display, buttons, and brains. It will then just have connections to hook up a relay/triac box (for the AC appliances like the heater and pump) and headers for one (or more) temperature sensors. I was thinking of having an enclosure just for the controller on its own but also having a part for using it with the motorized rotary.

The code for all this is already available (see above) and I might offer the 3D printed parts as well. I am thinking of also offering kits folks can buy at a reasonable price. This way folks have a DIY option that, while certainly not as good as a JOBO perhaps, is more modular and more affordable.