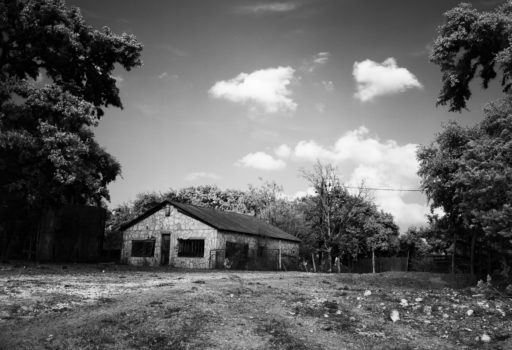 Yay! I finally managed to get results with Rollei’s IR film in 4×5! I’ve used it in 120 but have had a bit of trouble with it in 4×5. This shot as well isn’t perfect. The sky isn’t as dark as I would like (shot at the wrong time of day I think) and even though I metered at ISO 6, it looks like there was less IR light than I thought as there isn’t a lot of detail in the shadows and the leaves have some IR highlighting but could be brighter. I would also have liked to perhaps do a longer exposure to get some cloud movement.

It might also be the wrong time of year to shoot IR but the object of the exercise was to make sure my methods worked. In particular, I used an aluminum/mylar sheet (used for greenhouses and things) to wrap the bellows of my Chamonix 45F2 and help keep out the IR (as my bellows are not IR safe). This worked though I did fog one of my sheets somehow. I think it was when my dark cloth flew off (it was a somewhat windy day). Anyways, shot this as mentioned at ISO 6 using an R72 filter and my 150mm Fujinon lens at f11. Exposure was 1″.

The cows in the field were quite interested in what I was doing. You can’t see it form the photo obviously, but there were numerous cows maybe just a few feet from me staring at me most of the time I was working on this shot (they wanted food).